YADCA is recognised for representing Yandina interests to local, state and federal government.

Click on a heading to read about that issue.

A developer is appealing against Sunshine Coast Council’s decision to reject a service station in the heart of Yandina.

The proposal to build a service station and shop on the corner of Stevens and Farrell streets was rejected by Sunshine Coast Council earlier this month. The decision followed months of very strong community opposition to the plan.

On Monday 21 June 2021 Pearl Investment (Australia) Pty Ltd filed a notice of appeal at the Brisbane Planning and Environment Court against the decision. The case is pending.

The state government is examining modified plans for a residential development in South West Yandina.

The State Assessment and Referral Agency (SARA) will make a decision by 6 September 2021.

The new plans submitted by the developer contain strategies to mitigate the impact of the development on existing and potential koala habitat on the land bordered by Wappa Falls, Creightons and Bracken Fern roads.

The proposed development has met with vigorous community opposition due to the number and size of lots  and the proposed closure of Creightons Road.

The Sunshine Coast Council’s decision to reject a tourist park at Bridges is being appealed by the developer; and the matter is now before the Planning and Environment Court.

The application to build the tourist park at Carrs Road, Bridges, which was strongly opposed by the community, was officially refused by Council on 9 September 2020.

The application to build a Tourist Park at Carrs Road, Bridges has been officially refused by the Sunshine Coast Council. The decision was greeted with applause at YADCA’s AGM on 14th September 2020.

Council’s Principal Development Planner Mr Marc Cornell, had informed YADCA by letter, saying the decision notice is being drafted and will soon be available on the Council’s online development information portal, Development.i

The applicant has the right to appeal the Council decision. Residents or groups who had opposed the application may also make submissions in response to any appeal. YADCA will keep the community informed of any developments.

The new Councillor for Division 10 has been briefed on a controversial tourist park planned for the outskirts of Yandina.

The President and Secretary of YADCA briefed Cr David Law about the proposed development in Carrs Road, Bridges via an online meeting in early May.

The proposal has met with concerted community opposition since the land owner applied in May 2018 to develop it for 258 caravan sites.

YADCA has argued that the development would:

YADCA maintained that the development should not be approved; and Sunshine Coast Council assessors agreed, citing the state government overlay which classifies it as GQAL.

Despite this, outgoing Councillor Greg Rogerson had considered taking the matter to a Council vote in January or February this year, before the local government elections. However this did not eventuate; and the current status of the proposal is unclear.

All growth – no infrastructure

Yandina is earmarked to provide a disproportionate share of the residential land required to meet the anticipated population growth on the Sunshine Coast.

Sunshine Coast Council predicts a 39 per cent population increase in Yandina itself between 2016 and 2026.

Housing developments in Yandina include

Despite this, Yandina is not receiving any proportional local or state government investment in infrastructure and amenity. YADCA continues to lobby for improved infrastructure around Yandina.

The planned South West Yandina residential development – bordered by Wappa Falls, Creightons and Bracken Fern roads – will add to the already unsafe conditions for pedestrians and cyclists wanting to access the town centre, the primary school and bus stops along the Nambour Connection Road.

The only connection between South West Yandina and the town centre is a narrow two lane vehicle bridge with no pedestrian facility.

Pedestrians trying to use this route have been struck by vehicles.

The only pedestrian alternative involves crossing Nambour Connection Road where the speed limit is 80km an hour and there is no pedestrian crossing, pedestrian refuge or signs. Pedestrians must then walk through an off street park to reach a small footbridge across the river.

Concerns have been raised about personal safety using this route.

The single lane bridge on the Yandina Bli Bli Road at Maroochy River is a road safety hazard.

For many years YADCA has advocated for urgent attention. As yet, our state government representatives have been unable to secure funding to upgrade the bridge.

In May 2019 Sunshine Coast Council approved an application to build 15 hectares of greenhouses on the southern floodplains of the upper estuary of the Maroochy River at 199 and 269 Yandina Bli Bli Road, Maroochy River. This land borders the Yandina Bli Bli Rd tourist drive, and is clearly seen from Mt Ninderry tourist lookouts.

Opponents of this ‘factory farm’ development claim it will spoil the scenic amenity and diminish road safety through the introduction of large trucks on the narrow road and the single lane bridge at Caboolture Creek. 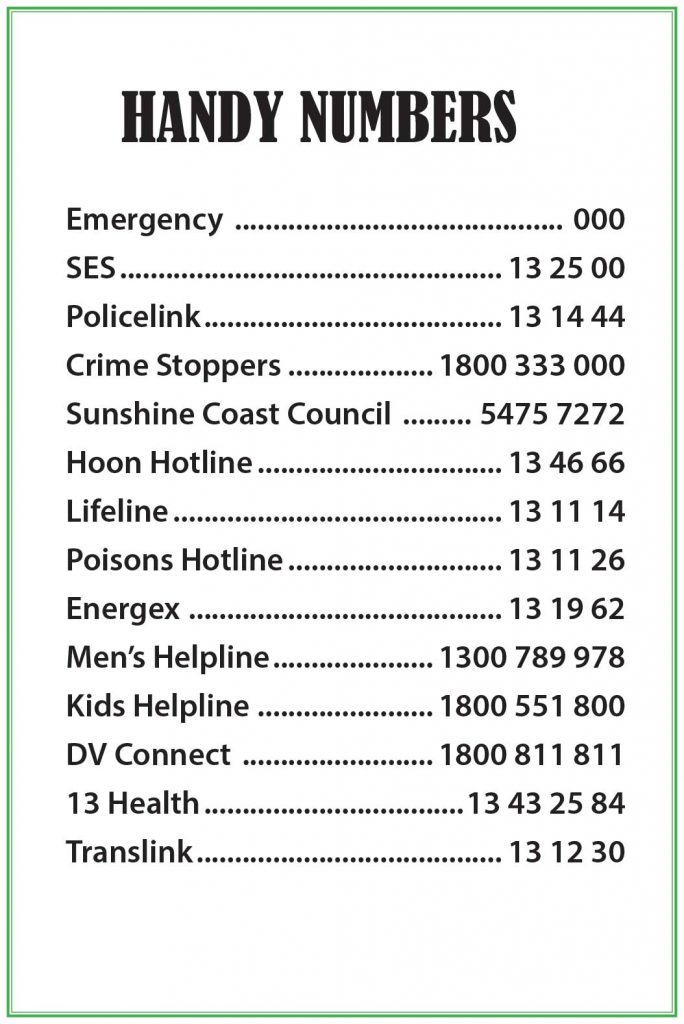