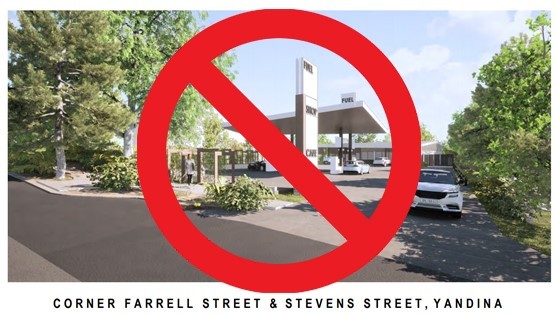 YADCA has repudiated the suggestion that a new fuel station, planned for the heart of Yandina, can be designed to blend in with surrounding historic buildings.

YADCA President Nigel Anns said the idea is nonsense. “The developer, Pearl Energy, has produced some pretty drawings for this project, but they are quite unrealistic.”

“If this is allowed to go ahead it will ruin the centre of our historic town.”

Nigel was responding to an article in the Sunshine Coast Daily which quoted a spokesperson for the developer, Pearl Energy.

The unnamed spokesman had said the service station would “reflect Yandina’s history and architecture.

The proposed development has met with concerted opposition from community and business groups with over 200 written objections lodged with Council so far. Concerns centred on loss of visual amenity in the historic town centre, as well as increased and unsafe traffic at the busy corner of Farrell and Stevens streets.

The spokesman told the Sunshine Coast Daily that the company is in the process of responding to a number of issues raised by Sunshine Coast Council. “We will be happy to discuss further as the application progresses,” he said.

“That statement is misleading,” said Nigel. “The development application was lodged by Pearl Energy themselves; and the zoning of the land would also allow for a community centre or a group of retail outlets more in keeping with Yandina’s village feel.

“We are not opposed to a second service station for Yandina, but not in this location.”