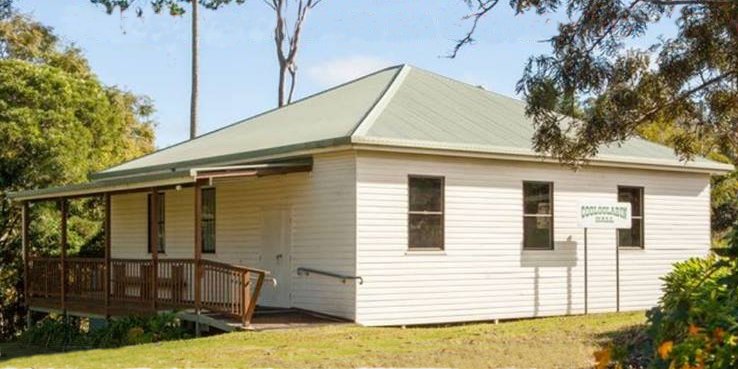 Cooloolabin Hall – a community hub for over a century – is set to enjoy even more popularity thanks to over $100,000 of improvements.

When it was opened in 1916 as the Cooloolabin School of Arts the humble building  consisted of a lending library, a stage and dressing rooms. It served as a meeting place for the fledgling community. After being wrecked by a cyclone in 1954 it was restored through public fund raising.

It fell into disrepair until, in 1996, it was refurbished for its 80th anniversary with painting, a water tank, and a new roof. New wiring and foundations were added a little later.

Now the Cooloolabin Hall Association, led by its three member executive, has made more improvements that they hope will make it attractive as a community and social hub.

Elaine Ogilvie is the Chair, Bruce Croxford is Treasurer and Michael Joyce is Secretary.

“About 10 years ago the hall was getting really rundown and we had no finances to fix it,” Bruce explained.

“We decided we had two options — either get behind it and give it a push, or let it die.

“We all decided it was well worth it.

“Historically it has been for local business people to gather and meet; but we wanted to improve it and broaden its scope and appeal as a venue.”

The hall has been upgraded for use as a temporary place of refuge in case of an emergency such as bushfire. “We liaised with the Sunshine Coast Council and they advised us and made sure all work was up to the latest safety standards.”

With its fully equipped bathroom and toilet and servery the Cooloolabin Hall can now also serve as a temporary base for emergency responders and accommodate them to stay overnight if required.

The hall now also has a ready water supply for fire fighters. Two years ago the committee replaced the hall’s small water tank with two 20,000 litre water tanks to provide 40,000 litres of water. One tank is specifically dedicated for the fire fighters. .

“We did that work in conjunction with the local fire brigades — the Image Flat and Cooloolabin Brigades.” Bruce said.

“The firies helped us considerably, and Council also gave us some money through grants.”

The final stage of the improvements has been a complete rebuild of the hall’s amenities to make them wheelchair accessible.

The committee obtained plans and established costs and received approval in principle from Council for a new bathroom and toilet, plus an extra toilet.

“We spent two years fund raising with help again from the firies, another Council grant and $25,000 raised through the efforts of our loyal volunteers

“Greg Rogerson (Councillor for Division 10 at the time) was so keen for this project to go ahead he provided money from his own discretionary fund.

“We were still short and to our surprise and delight Greg persuaded the Mayor to contribute from his discretionary fund.

“All in all we covered almost the total $100,000 it cost to provide the new amenities.

“By adding these new facilities and making the place look pristine we want to involve local people in more activities and to realise the potential of the hall as a venue for events like weddings and conferences.

Council to Proceed with Heritage Changes