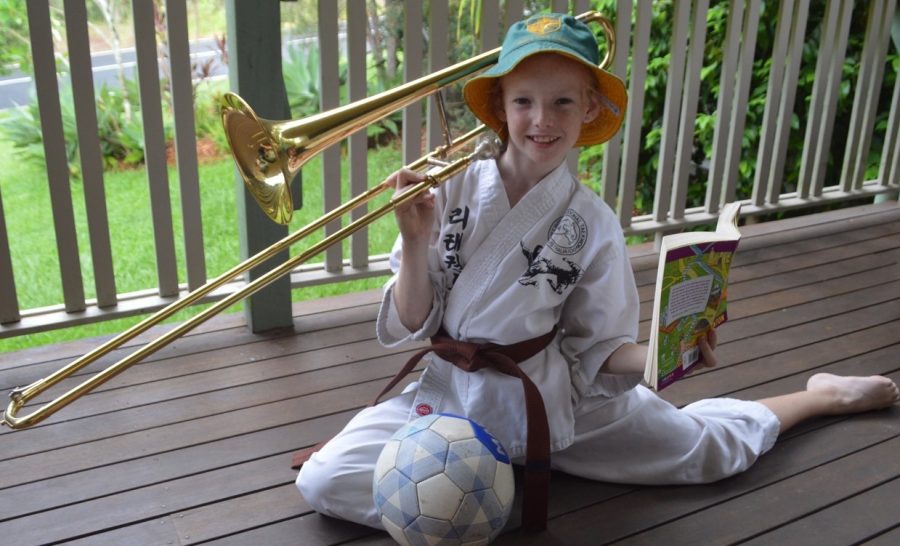 If you want to ask Sasha about her hobbies and interests you’d better be prepared to settle in for a long conversation. This 10 year old’s diary is very full indeed.

The Yandina State School pupil is involved in a head-spinning array of extracurricular activities covering music, self defence, performance and science.

Last year Sasha decided to join the school band and learn the trombone – not an easy instrument for a beginner. “I can’t get to position seven on the slide yet because my arms are not long enough,” she laughs.

“I decided to try it because Mum plays the flute and dad plays the guitar; and I thought it would be fun for me to play an instrument as well, but something different.  And our school band is great.”

Sasha loves music and has been in the school choir since 2018. As a member of the choir she has sung at the Yandina Christmas Carols two years in a row.

This Year 5 pupil is also a member of the local Indee Theatre Group.  In their summer pantomime double feature Sasha had a total of seven roles.  “I was a tree, then a dwarf, one of the forest folk and a little child; and I also had extra dancing roles as a tree and a butterfly.” Perhaps she should add ‘quick change artist’ to her resume.

For fitness Sasha does calisthenics with a Buderim club, and Rhee Tae Kwon-Do at the Yandina School of Arts Hall.  She became interested in the martial art after watching a demonstration at the Yandina Street Fair. Naturally, Sasha has shown her usual enthusiasm and she is about to contest for her Black Belt. But this pursuit also has its challenges for a growing girl.

“With Tae Kwon-Do you must be aware of your arm and leg length so you don’t hit your opponent in the face when you are training.  But I keep growing, so that gets tricky!”

Sasha also plays soccer with Nambour Yandina United and this year she will be a defender or a mid-fielder in the Under 11s.

And this summer she is attending the youth literature festival, Voices on the Coast.

In a few weeks Sasha will take part in one of the University of the Sunshine Coast outreach programs to engage senior primary school students with science and engineering.  “We will be looking at Robotics and we are going to make a sumo robot, I think.”

Sasha and her parents moved from Melbourne to Yandina in 2011. “When we announced we were moving here our friends predicted that Sasha would not have the same opportunities as kids at larger schools in big cities,” says Mum, Lyn.

“Well that’s just not true. Yandina has lots of great activities; and this school is amazing because it offers so many extra activities for kids, precisely because they know they are a small school in a small town,” she says.