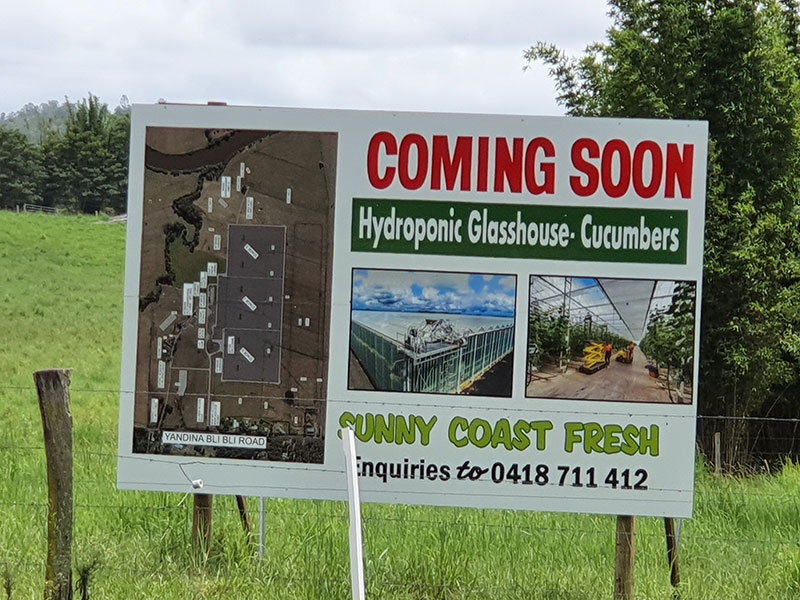 The future of a planned cucumber ‘factory farm’ at Maroochy River is in doubt following the sentencing of the sole director of a company which held the call option rights to purchase the land for the greenhouses.

Andrew Eric Young, 66, was sentenced to nine years for fraud and insolvent trading in the Brisbane District Court on 7 February 2020.

Mr Young was the last of three directors of national whitegoods company, Kleenmaid, to be found guilty of fraud and insolvent trading, 11 years after the business collapsed with almost $100 million in debts.  (See below)

In May 2019 Sunshine Coast Council approved a development application to build a complex of six large greenhouses over 15 hectares, to grow and pack cucumbers for the local and export markets.

The proposed development has been opposed by locals due to its impact on the scenic amenity (it is on a tourist route); and traffic safety concerns with heavy trucks using the narrow road and one lane Caboolture Creek Bridge.

The development application for the cucumber growing operation was lodged by Sunny Coast Fresh Holdings Pty Ltd, whose sole director is Mr Peter Van den Goor. Mr Van den Goor is also currently a director of Katunga Fresh, a tomato greenhouse facility located in Victoria which claims to no longer have any involvement in the development.

The land in question is located at 199 and 269 Yandina-Bli Bli Road.

Following Mr Young’s sentencing a billboard has appeared on the roadside edge of the property in question (see photo above).

Sunshine Coast-based Kleenmaid employed about 200 staff and had 22 stores, offering kitchen appliances and importing and distributing whitegoods. In April 2009 the company failed, with customer deposits of almost $26 million among debts tallied by liquidators Deloitte at $97 million. The Australian Securities and Investments Commission mounted a long-running investigation. One Kleenmaid director, Gary Collyer Armstrong, 70, pleaded guilty in October 2015 and received a seven-year sentence in relation to defrauding bank Westpac of $13 million plus two criminal insolvent trading charges. A second director, Bradley Wendell Young (Andrew Young’s brother), 53, was found guilty of 18 offences and received a nine-year prison sentence in 2016.

Zoning Changes – Have Your Say